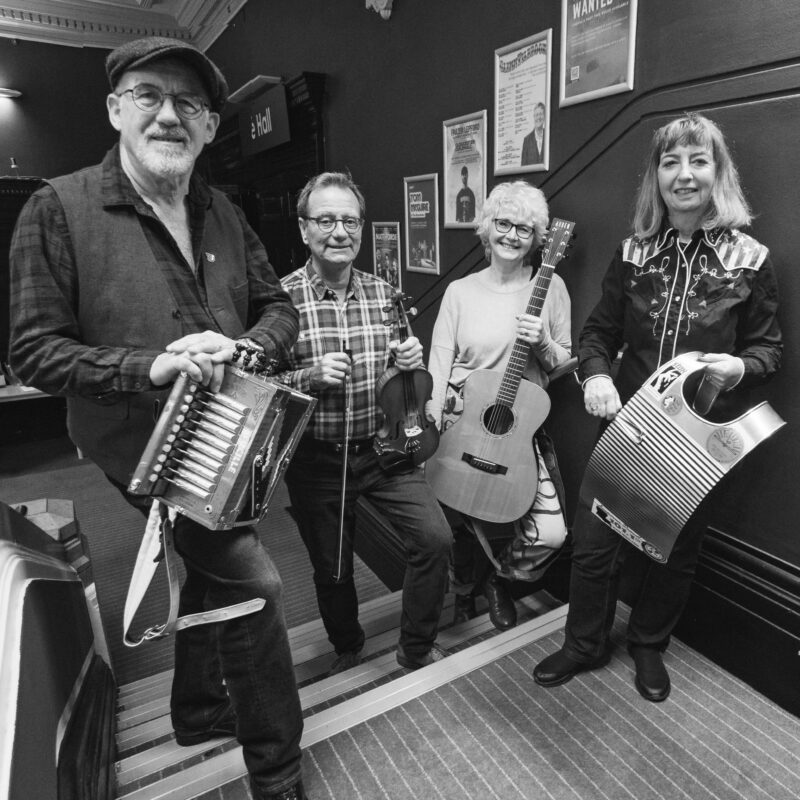 Haunting vocals, old time fiddle, traditional driving accordion. Evoking the roots of down home, front porch unplugged style dance hall Cajun and Creole music, played by musicians who are among the most experienced in Cajun music this side of Louisiana.

Fronted by award winning accordionist Phil Underwood, driving guitar from Denise Dryburgh, old time Cajun fiddle rhythms from Pierre-Henri Pichot, and Carole Lateman cranking it up to new heights on triangle and scrubboard. Four musicians who’s passion for the music of Louisiana shines out in exhilerating two steps, sweet waltzes and earthy blues recreating the authentic sound of the swamps.

DryWood Cajun Band is already getting noticed by people who love great toe-tapping music, including a confirmed booking at a major Cajun festival in 2023, to be announced. Contact us if you would like to experience heartfelt and exciting music for a great event. See also our Facebook Page for up to date news and blogs

Our next gig is at Ipswich Global Rhythm and Ipswich Jazz Festival 1-2 pm on 2nd July, 2022. Jazz, Blues, World and Caribbean music, and it’s free!

Band Leader Phil Underwood is a multi instrumentalist who has been playing Cajun and Creole music for over thirty years. He has won awards in Louisiana for his accordion playing:

Phil has put together many successful Cajun and Zydeco bands which have played in the UK, USA, Louisiana, Europe and the Middle East. He became a close friend of the late legendary Cajun accordionist Eddie LeJeune, which whom he performed, and has remained a close friend of the LeJeune family.

Pierre-Henri Pichot is an important musician from France who has been visiting Louisiana and playing Cajun fiddle since the early 1970’s. He has played on stage with many great names in the Cajun world and brings a superb old timey traditional Cajun style to his fiddle playing. He played with Phil in the acclaimed traditional Cajun band The Miri-Kools.

Denise Dryburgh started singing as a teenager in a successful all girl group DeLorelei and subsequently made her name on the folk circuit as a fine and powerful folk singer and session leader. She toured folk clubs and festivals between 2009-2014 as part of a harmony trio The Morning After. Since early 2018 she has been the percussionist in folk band The Pitmatics and now also brings superb driving rhythm guitar to DryWood Cajun Band.

Carole Lateman has been playing Cajun and Zydeco percussion for many years, as well as dancing and running a successful Zydeco dance club. She is a regular at Cajun and Zydeco festivals, where she runs a Cajun disco with her husband Nigel. Carol complements DryWood Cajun Band with exciting and insistent rhythms on triangle and scrubboard.